Don't miss the incredible Chris Stapleton as he heads on down to Gorge Amphitheatre on Saturday 4th June 2022 (Rescheduled from Saturday 12th June 2021)! As one of the biggest names right now in Country, Chris Stapleton is gracing the stages once again on his All American Roadshow tour dates and his lucky North American fan base can grab the chance to be a part of it! Get your tickets now for a sensational night of live music! 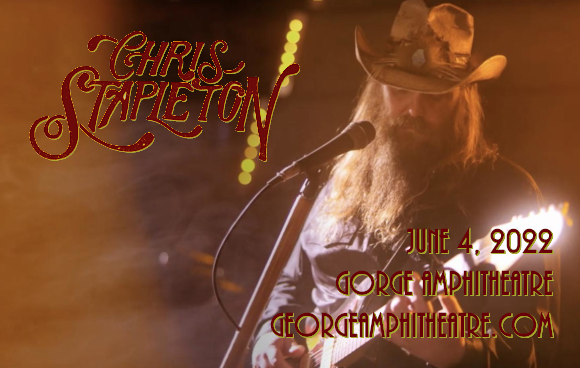 The American singer songwriter Chris Stapleton has been rocking the stages across the world with his impeccable music and 2022 brings the talented star to the stages across North America once again! His All American Roadshow dates have been so popular that he's extending his tour!

The amazing Chris Stapleton grew up with one passion in mind for his career and that's making music. With his guitar skills he began to create songs for various fellow artists as well as work on his own solo anthems. With over one hundred and seventy in total, for both his career and for artists such as Kenny Chesney's five-week number-one "Never Wanted Nothing More", Josh Turner's "Your Man', George Strait's "Love's Gonna Make It Alright", and Luke Bryan's "Drink a Beer". He has truly made his mark and continues to bring his elevated songs out on the road for his fans to enjoy.

Chris Stapleton has received nothing but the highest praise and incredible recognition for his work including a handful of Grammy Awards, seven Academy of Country Music (ACM) Awards, and ten Country Music Association (CMA) Awards.

Join him as he celebrates his previous releases to date in an incredible and unmissable performance this coming Summer! There's no time to loose – grab your place in the crowd for a night of pure on stage charisma and charm!