The Alchemy Tour comes to Gorge Amphitheatre on Saturday 5th October 2019, bringing EDM fans an incredible line-up of acts, including NGHTMRE, Slander, Seven Lions and The Glitch Mob! This absolute dream team will be pumping out the dancefloor bangers all night long, bringing one huge party to The Gorge, so expect hard-hitting bass and soaring melodies as they keep the drops coming! And who knows, there may even be a huge on-stage collab waiting in the wings… Watch this space! 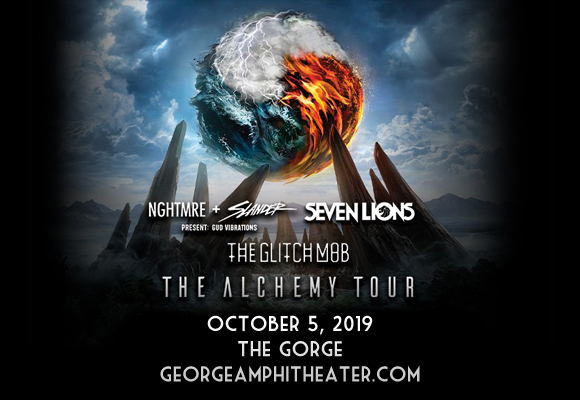 Nghtmre's career brought him to the forefront of the trap and house scenes in 2014 when his remixes of tracks by Tiësto, Rae Sremmurd, and Skrillex gained international recognition. He went on to be signed to Diplo's record label, Mad Decent, and in 2015 he released his debut EP, Nuclear Bonds – a collaboration with fellow producer Slander. His debut solo effort, NGHTMRE EP, was released the following year and it peaked at number 17 on the US Billboard Top Dance/Electronic Albums chart. Subsequently, Nghtmre has charted two Top 30 hits on the US Dance Chart: his collaborative single with producer Dillon Frances "Need You" (2016) and his 2018 single with The Chainsmokers, "Save Yourself". Magic Hour, his most recent EP, was a joint project with New Orleans rapper Pell and was released in 2018.